It's about respect
be a courteous river user

Friends of Pool 2 promotes safe, courteous use of the river. We strive to educate recreational users regarding river rules, etiquette and safety. We encourage respect for the river and its environs, cultivating a ‘leave it cleaner than you found it’ ideology.

Touring the Mighty Mississippi by boat 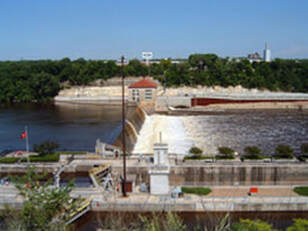 Many Minnesota boaters would be surprised to discover this recreational gem of a waterway so close to the city. Pool 2 of the Mississippi River includes miles of pristine scenery and wildlife habitat that you might expect to experience only in the northern reaches of our State. If you travel west from St. Paul and head up the Minnesota River past Fort Snelling State Park on the way to Shakopee, you'll experience a secluded and picturesque river valley virtually on your own. Returning down the Minnesota to the Mississippi and travelling north of the confluence of the two great Rivers, you can make your way to Minnehaha Park and Lock and Dam # 1 (also called the Ford Dam – see photo at right) which is the northern reach of this section of the river called Pool 2.

Heading back downriver, you'll pass through St. Paul, where you'll view the downtown skyline and landmarks such as the Minnesota Science Museum on your left and historic Harriet Island on your right. East of downtown you can see some of the region's industrial fleet operations with loading/unloading of commodities such as grain, gravel, coal, scrap iron, and salt.

Continue on downstream and the hustle and bustle of the city disappears as you enter the quieter suburban areas of South St. Paul, Newport, Inver Grove Heights, St. Paul Park, and Cottage Grove. Further south you'll pass Grey Cloud Island and Spring Lake and come upon Lock and Dam #2 near Hastings. This lower section of Pool 2, between St. Paul and the Hastings lock, is almost completely devoid of commercial development and features just a scattering of private homes. It is abundant with an amazing amount of bird life, including Bald Eagles, Blue Herons, Egrets, Pelicans, Cormorants, Gulls and Terns.

Planning Before You Go

River travel is probably easier than you think. However, reliable equipment is a must. Where you go on the river should be dictated in part by your method of boating. Care must be taken if traveling in a small craft such as a canoe, kayak or small fishing boat. It’s likely that you’ll encounter commercial barge traffic plying the main navigation channel of the Mississippi River from Minneapolis downriver. Remember that commercial traffic always has the right of way, and you should give the towboats a wide berth. House boats and large cabin cruisers also use the same main channel and can create large wakes. The wakes of larger cruisers can be significant and require caution. For smaller canoes and kayaks the river’s edge and back waters may be preferred. You can experience the Minnesota River safely in a 14ft fishing boat and small horsepower outboard motor. With experience these boats can also navigate the main channel of the Mississippi River, given good weather conditions and minimal winds. Knowing how to approach and handle a large cruiser wake is important to avoid being swamped.

Safe Boating on the River

Boating on the river can actually be safer than boating on lakes. Why? Because boat traffic on the river is largely restricted to operating within the main navigation channel, keeping the boat traffic flow similar to interstate car traffic. For new operators, it limits the chaos of cross-traffic and potential problem areas associated with uncontrolled lake traffic. This is also true for the seasoned operator, and results in a more relaxing and enjoyable ride.

Don't Forget About The Current

On a lake, if you have a mechanical failure, your boat will stay relatively close to where the failure occurred. On the river, YOU WILL CONTINUE TO MOVE DOWNSTREAM DUE TO THE RIVER’S CURRENT. Throw an anchor out to hold your boat’s position as soon as a failure occurs. Be aware that other boaters may be uncomfortable leaving the main channel to approach you. River depth varies significantly and larger boats WILL NOT leave the main channel due to their risk of grounding and damage from stumps, rocks and wing dams (explained below).

Before You Launch Your Boat

How Do River Boaters Know Where To Go?

The Army Corps of Engineers maintains a navigable channel for commercial traffic. That channel is the ONLY safe place to be. Outside of the main channel, BOATER BEWARE! The channel is marked by a system of floating buoys in conjunction with shore mounted channel markers, shown at right. The buoys are colored RED or GREEN. Look closely and notice that the red ones are pointed and the green ones are flat-topped, as another method of identification. They also have reflective material for night illumination.
The red buoys indicate the right-hand, or starboard side as you travel up-river, and the green denote the left-hand, or port side of the river channel. This is best remembered by citing a rule of thumb, “RED RIGHT RETURN”. This means that the red buoys are on the right side of the river when you are returning “up-river”.

STAY BETWEEN THE RED AND GREEN AT ALL TIMES 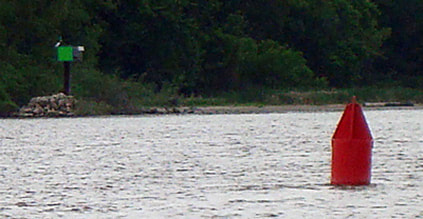 When passing a channel buoy, the boat operator should always scan ahead to locate the next visible marker, and keep it in sight as the boat navigates the channel. These markers may be mounted on the shore, or floating. Observing other boaters can be a guide, but exercise caution since fishermen in small craft often run outside of the main channel to access their favorite fishing spots. Shown at left is a view traveling up-river. Remember the catch phrase, "Red Right Return". The boater in this situation should keep to the left side of the red buoy and steer toward the left river bank, staying to the right side of the green land marker as it passes. In this case, the safe channel will hug the left shoreline of the river. 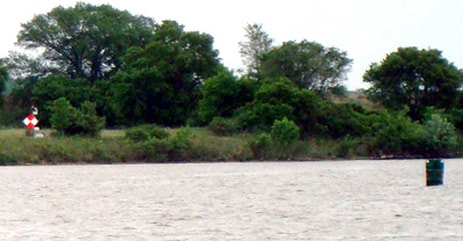 In the image at right, the boater is traveling down-river, so the buoy positions are reversed. The red channel marker is on the left side (the opposite of the "Red Right Return" rule) so the direction must be down-river. Here the boater should keep to the left of the green floating buoy and navigate toward the river shore, staying to the right of the red land marker.

WHAT TO DO WHEN YOU ENCOUNTER COMMERCIAL TRAFFIC

Commercial barge traffic always has the right of way within the navigation channel. Caution is required when passing a towboat and barges in either direction. You must be visible to the towboat captain at all times. Remember, if you can’t see the pilot-house windows, the captain probably can’t see you.

The DANGER ZONE is in front of a barge. It can take one-half mile or more for a towboat with barges to come to a stop. If you have any mechanical failure while in front of a barge, you are in trouble. A towboat captain will have little tolerance for boaters operating in this area and will blow a loud warning horn if you are there.

Illustrated below is a towboat captain’s blind spot. Do not operate in this area! You must move aside very early when approaching a towboat, with or without barges.

HOW TO PASS A BARGE

Take a long stick and push it around in the street. Change the direction of travel of the stick. This will give you some understanding of how a barge moves on the river. The front of the barge changes travel direction by the towboat pushing the back of the barge to the new line of movement.

If you observe closely, you will learn how the back end of a barge moves. The towboat and barge back will always move to the outside of a curve reducing the distance between it and the shore line.

A general rule to remember:
PASS ON THE INSIDE CURVE SIDE OF A BARGE